by Ilmilog GuruPosted onOctober 25, 2018
Advertisement
Secretary school education Punjab has issued a Notification regarding Abolish DTEs District Teacher Educator 2019 Staff Development School Education Department on 06-10-2018.
Detail of Abolish DTEs District Teacher Educator 2019 Staff Development School Education Department is asunder,
vi. Academic training Development Units (ADU) developed for teacher training but no training output from ADUs observed. New training set up which replaced CPD is wasting departmental financial and human resources which is costly wasting CPD Framework. Therefore, ADUs in all Punjab may be converted into CTSCs and previous training set up may be reversed in Head Teachers Trainings at District Level and School teacher Trainings in their own schools by DTEs through On-Job-Spot Mentoring’s, so that academic sessions may not suffer any gap of teachers non-availability in their schools during their training ADUs and District QAED Units. DTEs may be allowed to continue their Joh with the post name as DTE or AEO in BS-16 and they may be allowed to work under the administrative control of CEOs and DMOs for monitoring and evaluation at the same time.
5. AND WHEREAS, facts of the case are briefly as under:-Government of Punjab launched Continuous Professional Development (CPD) Framework Programmed in 2007 through Directorate of Staff Development, Punjab, Lahore, with primary objectives of enhancement of professional skills of primary teachers and improvement in quality of education by providing mentor in classroom for coaching the teachers. This program was in recognition of the fact that the goal of quality education could not be achieved without improving the professional skills, motivation, and accountability of teachers. For this program, posts of District Teacher Educators (DTEs) were created and said DTEs were hired amongst the teachers from the Education Department through EDOs (Education) concern… They submitted their willingness/undertaking to work with DSD that.) will abide by all  the rules and instructions issued by DSD from time to time  regarding teacher training program’ DTEs were paid an honorarium as compensation for the travel required by the post, but as per the terms and conditions of their appointment, their seniority, promotion, and other benefits as Government servants were kept intact as in their parent department. Consideration for promotion was in their parent department on their turn in respective cadre as per seniority etc. and was not linked to their service as DTE which was not of their care. Therefore, on completion of tenure in CPD Programmed as DTEs, their services were to be returned to their parent department for adjustment into schools as teachers, it is important to mention here that Finance Department clarified that CPD was a time-bound initiative. Thus posts of DTEs were temporary and incumbents have to be returned to Department at the end of the Program. Furthermore, vide letter no. DS (O&M) 5- 3/ 2004/ Contract/ SED-(P-III) Regulations-Wing S&GAD also gave advice as under, Contract employees working in the Project, Programmed, PMUs /PMOs and other time-bound time Development Activities are not covered under the policy notification dated 14.10.2009 for their appointment on regular basis.
Advertisement
Pay scales after discontinuation of CPD Programmed. Whereas the case of earlier DTEs was that of poor performance. Having reliance on the dictum in the Hon’ble Supreme Court’s order dated 28.07.2016 in Civil Petition No. 1597.1/2016, the Hon’ble Lahore High Court. Lahore dismissed the Writ Petition No. 9220612017 vide judgment dated 26.12.2017 end the learned counsel of the appellant did not press the appeal In ICA No. 183994/18.
9. . . . NOW, THEREFORE, having gone through the relevant record. Orders of the Hon’ble Courts in this regard and listening viewpoints of the appellants as well as Departmental Representative. It reveals that appellants are habitual litigant and try to waste their potential in unnecessary litigation instead of focusing on their primary Job description i.e. teaching after the judgments of the Hon’ble Supreme Court of Pakistan in Civil Petition No. 1597. /2016 dated 28.07.2016 and Civil Revision Petition No. 45/U2016. Dated 22.08.2017, the contentions made by the appellants are baseless. Therefore, I Secretary. School Education. Do hereby reject the appeal of the appellants being devoid of merit. 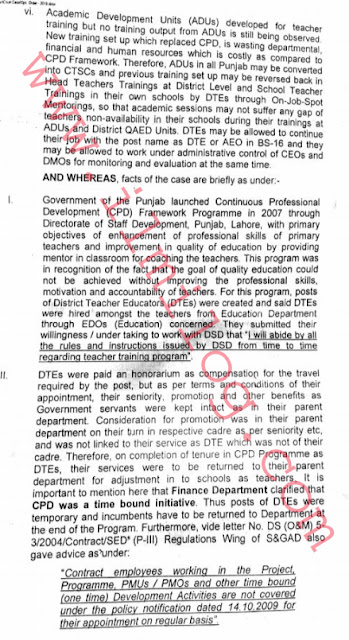 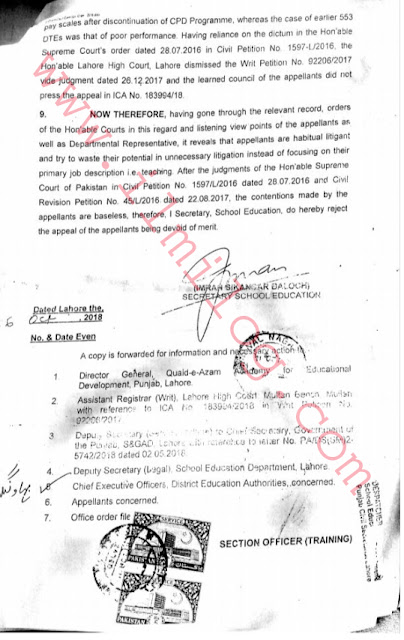