However, submitted to District Education Authorities, Chief Executive Officers, in Punjab.
Advertisement
CONTRACT EXTENSION OF EDUCATORS who are LACKING in QUALIFICATION (PROFESSIONAL) such as B.ED) as per the 2012 Policy of Recruitment.
It is directed & refers to a subject above
2. This Department vide letter No SO(SE-III) 5-93/2017 dated 03.09 2018 issued directions. So, the Educators who have recruited under Recruitment Policy, 2012. It did not acquire the professional qualification of B.Ed. even after a contractual period of five years. So, they may be sent packing with immediate effect under intimation to this department.
You may also read:  Upgradation of Computer Operator Jobs by Chief Secretary Punjab
3 The Honorable Court has directed to furnish data of any such Educator who has granted extension in a contract in violation of an above-said letter
SECTION OFFICER (SE-III)
C.O.
1 PS to Additional Secretary (Schools). 2. PS to Additional Secretary (DEA) School Education. 3 PA to Deputy Secretary (EE) 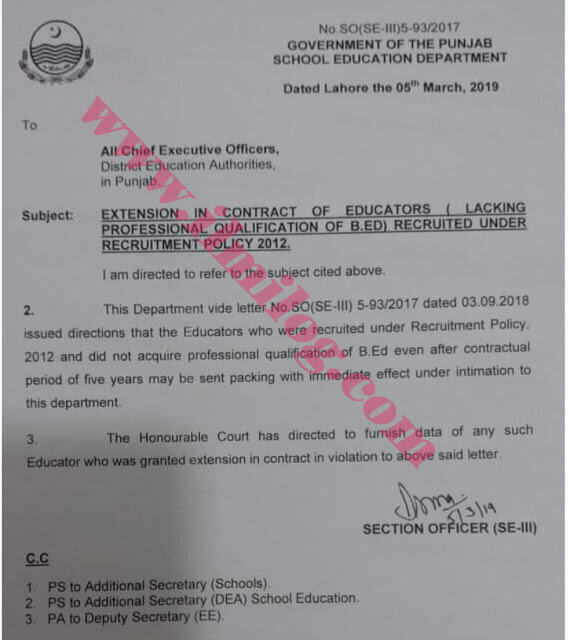 One thought on “Contract Extension of Government Education Jobs 2012”